The History of Pocatello, so named in the memory of Chief Pocatello, begins in the late 1800’s when the area was a treeless sagebrush plain, carved from the Fort Hall Indian Reservation, settled by railroaders.  Pocatello owes its location directly to its geographic setting at the gateway to the Snake River Plain. Its layout was dictated by the railroad, around which the town was built. Its politics have reflected a never-affluent, pluralistic blue-collar town at the edge of Mormon country.

“Although there was no land open for settlement, there quickly grew up a typical frontier town, “wide-open,” as the saying is, where excitement ran high, where vice went unashamed, and where saloons and gambling knew no closing hours nor Sunday laws. At last the demand for more room became so insistent, that the United States government purchased two thousand acres of reservation land from the Indians, to be used as a town-site. This was surveyed in 1889, and the following year lots were sold at auction at prices ranging from ten to fifty dollars. At that sale the foundation of many comfortable fortunes of today were made. Already some buildings had been erected, and it was feared that the purchase of their sites by other parties might yet cause trouble. But the squatter’s right was honored, and the man who had built a store or home was allowed to secure a title to his holdings.”

Early History of Pocatello: The Townsite and the Indian Reservation

The early community of Pocatello, from 1882 until 1888, had to exist within the confines of the Oregon Short Line right of way because the Fort Hall Indian Reservation surrounded the area. Houses were erected along the west side of the railroad right of way, with prefabricated buildings moved in from railroad settlements at Omaha, Nebraska, and few from Battle Creek, Idaho, (north of Preston). Some were moved from Eagle Rock (Idaho Falls), to Pocatello in 1887. The townsite was too small and trespass on the Reservation was practiced by many. It was a tense situation.

Founded in 1889, Pocatello is known as “Gateway to the Northwest.” Thousands of trappers and gold miners, as well as pioneers on the Oregon Trail, traveled through the area to continue west along the Snake River, which borders the Indian reservation just before it bends west and heads for Oregon. Much earlier, Fort Hall was established as a trading post in 1834.

There were not at first any churches in the community. A railroad official, who was a Mason, arranged for a school to be established in one of the railroad houses during the day; upstairs at night the first Masonic chapter in the area met and on Sundays a Congregational Church service was held. 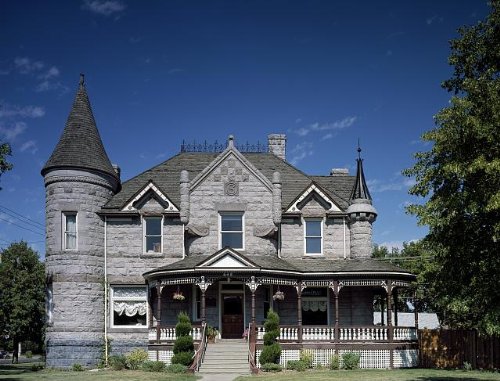 A majestic house on the west side of Pocatello is on the National Register of Historic Places. Built in classical revival style, the two-story, turreted castle cost around $12,000 to build in 1902, at a time when a dollar was a dollar. The 16 room structure is faced with stone which was quarried in the McCammon area. After a period of little use, the City of Pocatello acquired the house in 1974 and it was available to rent for special events until 1995. Because it was not handicapped-accessible it was sold in 1995, and is presently occupied as a personal residence.

The Standrod House was built by Judge D.W. Standrod. Standrod was born in Kentucky in 1858, and lived first in Idaho in Malad City where he was associated with banks. He was a member of the drafting committee for the Idaho Constitutional Convention in 1889. While he ran for several political positions, he was never elected (he was a Republican from a Democratic city). He was, however, a power in Republican politics in eastern Idaho. He served as a district judge in Pocatello.

The Standrod family was prominent in civic and cultural affairs. Mrs. Standrod was active in women’s clubs. A daughter who was active in school activities and a leader of her class died at 16, to the great distress of the family. A son, Drew Standrod, Jr., lived in Pocatello for many years and died in 1937. A veteran of World War I, he was a well-known attorney, was musical and a leader in community cultural activities.

To learn more about the history of Pocatello click on the link below. It takes you to The Open Group Facebook Page
You Know You Grew Up in Pocatello When…